Hotels Montebello
It’s made of an astonishing 10,000 western red cedar logs, and ‘logs in’ at a whopping 4-million cubic feet of volume.
Fairmont Le Château Montebello lays claim to being the biggest log building on the planet. A massive lobby and rotunda anchor four wings extending out in a star formation that’s painted dramatic black on the outside, but retains its natural warm shade on the inside. 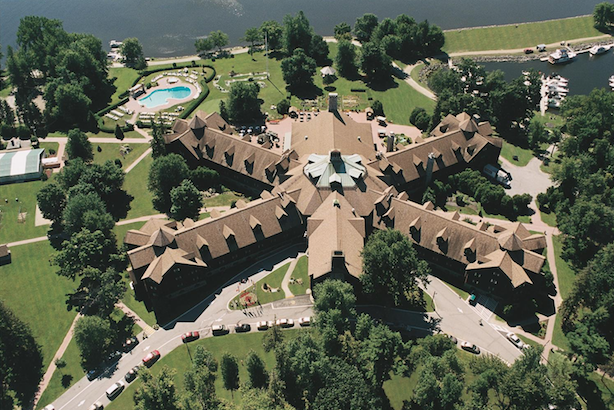 Phenomenal, 70-foot log rafters support the atrium lobby, with a central, three-story stone fireplace, a mezzanine overlooking the stunning space, and a 3rd-floor balcony with a perspective over the wonders of its pristine, old-growth forest surroundings.
This incredible building is topped by half a million hand-made cedar shakes, and boasts over a hundred miles of carved wooden mouldings. 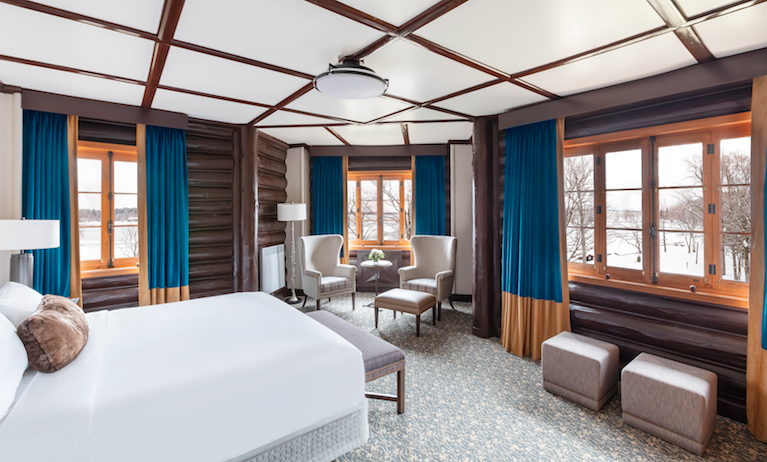 The best part? It’s not the private, waterfront retreat of a reclusive billionaire. As one of Canada’s iconic, former railway, ‘castle’ hotels, any visitor to the Montebello region of Quebec near the Canadian capital of Ottawa, can experience this riverfront resort in the midst of a 300-acre forest reserve.
Unlike many of its sister historic Fairmont hotels which evoke French chateaux in Canada’s great urban and wilderness destinations, Château Montebello stands alone as a breathtaking example of contrasting castle grandeur in rustic style.
The resort is an incredible architectural and construction feat, and an astounding vision of hospitality, with a rich history. 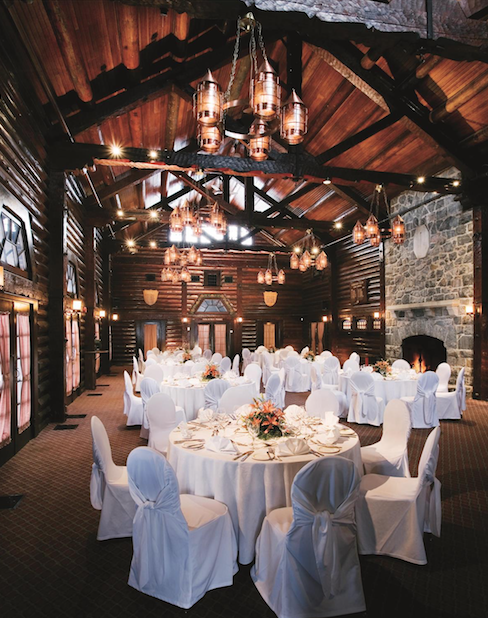 The property dates back to the 1600’s, part of the original land grants from the French King to settle ‘New France’.
In the late 1920’s, its new owner envisioned an exclusive, private wilderness retreat for the country’s political elite from nearby Ottawa and business leaders from Montreal only a bit farther away. Original club directors included the Premier of Quebec and a host of nation builders: the presidents of the National Bank of Canada, the Bank of Montreal, the Royal Bank of Canada and the Canadian Pacific Railway.
Which may be why, despite the onset of the global economic crash in 1929, the project went ahead. A special spur of the CPR rail line was built to bring deliver the massive logs to the site, and 3500 workers and artisans worked 7 days a week, around the clock using unprecedented electric lighting at night to complete this visionary ‘log cabin’ in a mind-boggling 4 months.
On Canada Day, July 1st, 1930, the private members’ club opened, with a grand masked ball as its spectacular launch on the world’s social scene.
For the next 40 years, the who’s who of the Canadian elite played, networked, dined and celebrated family milestones at the club and its waterfront, wooded 300 acres. Non-Canadian club members included European royalty like the Netherland’s Queen Juliana and Princess Grace of Monaco, and a glitterati of guests included international and Hollywood royalty, even US President Harry Truman who expressed a desire to fish his ‘first Canadian trout’ on his visit to Ottawa in 1947.

From Private Club to Luxury Resort

In 1970, the club re-opened as a resort and bucket list destination for any discerning traveler. Now, Fairmont Le Château Montebello is known world-wide for its one-of-a-kind setting as well as rustic-chic flair, warm French-Canadian hospitality and cuisine. 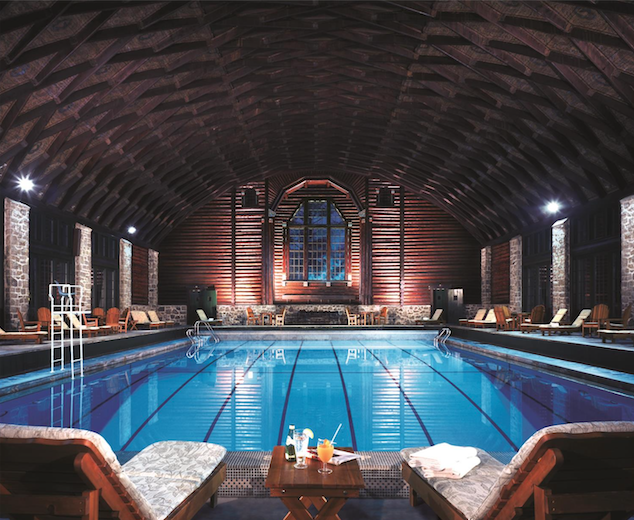 Other buildings have been added to the resort, including a separate log cabin, accessible by underground tunnel, with a 75-foot indoor pool – the largest in Canada – at the foot of totem poles that support the roof.
Vast spa, sauna, and fitness facilities enhance the 40+ on-resort activities surrounding Chateau Montebello. Swim and sunbathe next to the pool or river. Boat in to the marina. Play 18 holes of golf, a match of tennis, or try your hand at iconic Canadian winter activities like dog sledding, curling, ice-skating or cross-country skiing. In the warm spring and summer months, or during vivid autumn colors, you can hike and cycle tranquil woods and paths. 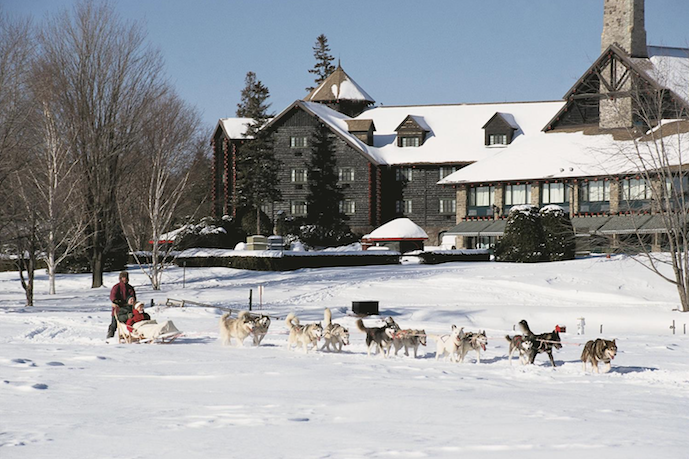 The resort brings holiday celebrations to life, too. Imagine a traditional Canadian Christmas within the vast log walls and beams, and the tastes and sights of a Quebecois maple sugar shack experience in early spring.

Fairmont Le Château Montebello celebrated 90 years as a one-of-a-kind landmark of architecture and hospitality on July 1st, 2020. The pandemic has postponed, but not canceled, celebrations, which have been rescheduled to Canada Day, July 1st, 2021.

Images courtesy Fairmont Le Château Montebello
Copyright BestTrip.TV/Influence Entertainment Group Inc or Rights Holder. All rights reserved. You are welcome to share this material from this page, but it may not be published, broadcast, rewritten or redistributed.